I have stolen this from

I know very little about some of the people on my friends list. Some people I know relatively well. But here’s a thought: why not take this opportunity to tell me a little something about yourself. Any old thing at all. Just so the next time I see your name I can say: “Ah, there’s Parker… she likes money and cereal.” I’d love it if everyone who’s friended me did this. (Yes, even you people who I know really well.) Then post this in your own journal. In return, ask me anything you’d like to know about me and I’ll give you an answer.

Today I had such a strong feeling of love for my son that my heart skipped a beat. Don´t get me wrong, I of course loved him before, he is the most important person in my life.
Today, I had the chance to observe him without him noticing me. I was in my car at a red traffic light when he crossed the pedestrian lights on his way to our agreed meeting point. He is currently so lanky and thin, his feet so huge, his arms and legs almost too long for his small body, as I say like a normal 13-year-old boy. Slightly stooped he scuffed across the street. Then he realized me and gave me one of his fantastic smile - cheerful by nature :-)  It was one of those moments a mother never ever will forget!
Here is a picture of my sunshine with one of his christmas gifts... 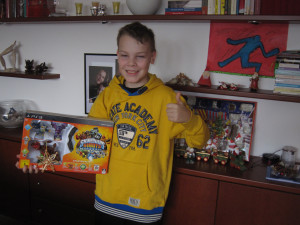 ... and one in his favorite spot while watching TV! I hope, everyone of my LJ-friends had a good start into 2013! I wish you all the best for the upcoming year (and beyond). May every dream, be it a big one or some small wishes, come true! May it be filled with lots of love, wonderful experiences, some good adventures and valuable insights and maybe some new aspects!

We had a great party last night! My start to 2013 was wonderful. I danced, laughed, drank (not sooo much) a lot and we had a fantastic delicious dinner at my friends italian restaurant. I guess, Patrick let of a firework with his friends for almost 2 hours! They had so much fun, too.

Now, I´m sitting here listening to the Vienna Philharmonic New Years Concert enjoying my time (Patrick is still sleeping) looking forward to the things this year hopefully keep at hand for me. Some things are already launched, some I don´t not know about now and some will hopefully pass by without involving me! This year I try to do more things I WANT instead of things I HAVE TO do!

Having said this: Happy New Year to you all!

Some images of the firework last night. Some are a bit blurry but I guess you get the "feeling" :-) :
( Collapse )

I wish all of you a Happy Christmas! Hope you all enjoy the holidays with laughter, lots of gifts and good food and even more love!

I´m still on with this Meme!

Good things in my life:

- to see my 70-year-old mom looking around for some fancy (really fancy!) clothes after a long time fighting against cancer (and won!)
- seeing my son living up after some hard times at school, where he had to get along with mobbing against him
- to give a smile and get a smile back
- to be there for others and still be myself
- to get on with my new job as a learning coach
and still able writing english stories without embarassing other highly talented writers!

I wish everyone a Happy Christmas!

I´m so busy lately that I don´t even have time to post here, although I´m doing it now it´s all between cooking, decorating, writing and more stuff! Patrick´s birthday is on Dec the 4th and I still have some things to organize. I read a lot entries but haven´t much time to comment. I haven´t even watched the last eps of CM and CSI:LV.
I´ll make another entry when everything calms down a little bit!

This is just a sign of life and, well, a request which is of course a little awkward after I wasn´t a good LJ-friend lately. Is there anyone around who feels up to do some beta-work for me? It´s just about two or three drabbles or ficlets (I´m not ready with writing yet :-/ ) I´m a non-native speaker so there it definitely poses a kind of challenge ;-)

Greetings to you all! I wish everyone a pleasant christmas season!

Today my much-anticipated workshop in suggestopedia was cancelled. Well, acutally, it´s a bad thing because it would have been a wonderful supplement to my learning coaching skills. On the other hand, it´s bringing an unexpected day off which is VERY GOOD :-) I have time to organize my stuff, do some things I had planned for next week, etc. NO, NO CHORSE!!!

I had a stressful week. Not so much because of my amount of work more in an emotional way. On Monday, I had a preliminary talk with a coachee and his mom. He is a really clever and bright 9-year-old boy but his mom is a histerical, overambitious and (more important) totally frustrated mother. She always talked to him in a ironic or/and derogative way. I more than once clenched my fists during the talk.
One day later, she wrote me a letter (email) which was so awful, so bad and sad it makes me wonder what must have happened to this woman. She actually insists on giving away her son because he bears the blame of all the trouble she has with her daughter, husband, friends and neighbours (can you believe that?). How frustrated, desperate can someone be to blame her 9-year-old son?
I´ve confered with some colleagues about it and they´ve recommended to leave the coaching be and encourage the mother to request for help in professional family-therapy institutions, which I did.
I don´t get any response yet, but I hope she will be reasonable enough to get support to eventually help and heal her family. There is always that little boy in my mind which has to carry such a heavy burden in his young age.

I guess, I´ve experienced the "dark"- side of my new job, which happens, due to the affirmations of my colleagues, really, really rarely. Hopefully!

A sign of life! I haven´t posted for a while and I´m sorry for that. Somehow I haven´t much to tell/share/rant about (which of course isn´t true because everyones life is in a certain way interesting and worthy of mention) furthermore RL is seizing me, in all its wonderful, terrible and overwhelming facets. Usually I´m lurking and also read most entries on LJ without commenting or I´m really, really late with it. I hope, you forgive me! I´m with you all and haven´t forgotten my LJ-friends!

The currently best facet:
I finally had some wonderful coaching lessons lately with some so cute and sweet coacheés! I really love my new profession and I hope there will be a lot more lessons. It´s so great to see when they change their attitude in relation to learning problems and issues.

Another fact:
It´s my favorite season! I love autumn in all its richness, blaze of colors and multifaceted fragrances and lights! I love to be outside for a good run or walk :-)
Here are some pictures from the prospect out of my (first) working place. Even a shabby parking lot looks much better! 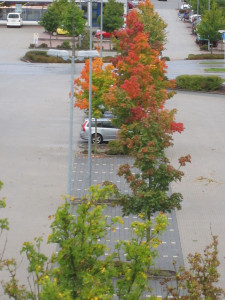 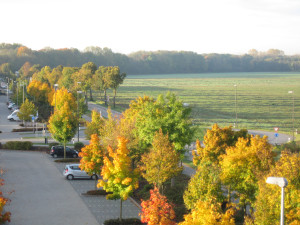 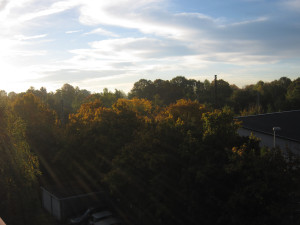 And my kitty loves the autumn sun too ♥ 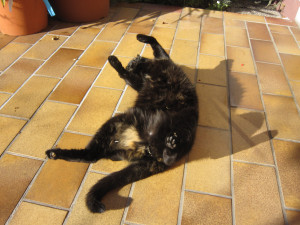 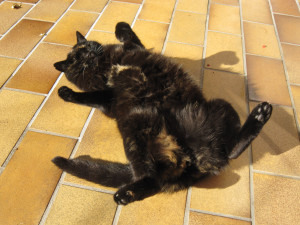 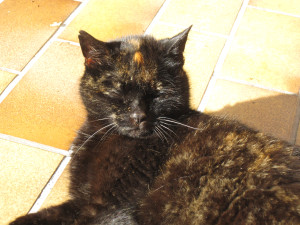 I´m so sorry for all my english friends but I have to do an entry in German because it´s one of the moments I´m  impressed of the German TV (which I´m mostly not!)

For all who are interested anyway, here is a link! I hope it works!